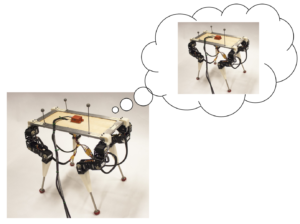 Until 2019, I worked as a postdoctoral fellow at the University of Oslo, funded by the project Engineering Predictability with Embodied Cognition (EPEC). In this project, we took inspiration from the human brain’s ability to model the world around us, and make predictions based on such internal models. We studied how similar prediction abilities can be implemented and taken advantage of in computers and robots. We had two target applications where our theories were tested: Robotics and interactive music. See more information at the project webpage,

As part of the FlatFish team at the Brazilian Institute of Robotics, I researched methods for optimizing inspection missions. Using multiobjective optimization methods, I developed a planning algorithm able to optimize inspection quality and the energy usage of the inspection vehicle at the same time. See more info here.

My PhD from the Norwegian University of Science and Technology (NTNU) focused on studying the relationship between evolution and learning in artificial agents. Both evolution and learning are powerful adaptation processes, and when used together in a single algorithm, complex inter-dependencies emerge. My thesis is available here. Presentations of selected papers from the PhD are available as videos: 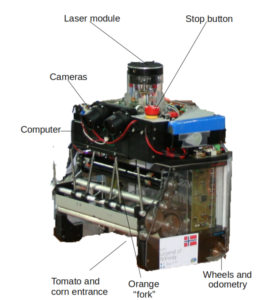 As part of the Norwegian University of Science and Technology’s 2010 Eurobot team, I developed a dynamic scheduling algorithm, enabling our robot to plan missions and adapt them to unforeseen circumstances. The thesis is availble here, and a paper on the technique here. The thesis won the 2010 Norwegian Artificial Intelligence Society Best Master Thesis Award.